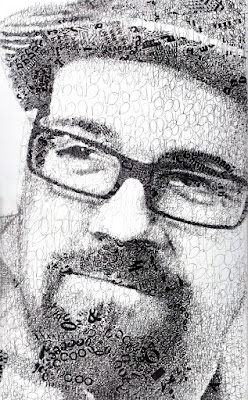 In her first book of poetry, Poets and Killers: A Life in Advertising, Helen Hajnoczky reports a single man’s life from delivery to death. Living a modest 60 years, this anonymous figure’s biography is formed entirely by the advertising slogans of the products he purchased in the years they were bought. Thus the childhood of Hajnoczky’s everyman figure is elucidated entirely with slogans and ad campaigns from the 1940s without any editorial intervention. This lack of an editorial hand is what makes Hajnoczky’s work so uncanny. Every phrase, every sentence, of Poets and Killers was lifted directly from print advertising—Hajnoczky has not written a word – nor has she had need.
Helen Hajnoczky’s restrained, tightly-focused, poems explore the modern milieu where individuality is defined by consumerism. From cradle to grave our individual narratives are written not by our actions but by our purchases. Our identities are tied to the products we purchase, the labels we wear and the information we filter.

From our conception to our burial, from pre-natal vitamins to coffins, we are consumers. Advertising saturates our world, coating everything from magazines to bus stops, staircases to cereal boxes, all in an effort to preserve and augment our consumer culture.

Poets and Killers playfully investigates what it means to be “an individual in a world where we are all sold the same individuality” and the possibilities for a “non-utilitarian humanity” which potentially exists “between the lines of advertising copy.” As the character’s life unfolds we must decide whether he falls within the realm of “poet,” “killer,” or a member of the category just as laden with poetic possibility: “an average person.” The chronology of Poets and Killers follows both the protagonist’s aging and the intricacies of the modern day-to-day but also how our relationship with advertising has grown. Advertising has—according to Hajnoczky—become increasingly insidious, moving from overt to subtle interplays within our formulations of self-definition, self-awareness and self-debasement. “Advertising copy no longer directly asserts that not using its product will result in a catastrophic tragedy, but carefully manipulates the reader into thinking they desire the product advertised.” In Poets and Killers: A life in Advertising readers follow the protagonist’s growth simultaneously with the growth of advertising.

In Woman’s World: a novel, Graham Rawle creates a new narrative constructed with over 40,000 individual fragments which he has painstakingly cut directly from hundreds of 1960’s women’s magazines. Each page in Woman’s World is a image of Rawle’s untranscribed collages, leaving the fragments of text forwarding the narrative, but still referring back to their material status as clippings. Norma Fontaine, the ‘leading-lady’ of Woman’s World, lives a life of handy tips and sensible advice, believing deeply in the lessons learned from the very woman’s magazines from which Woman’s World has been crafted. Her world begins to crumble as she is introduced to the boudoir photographer Mr. Hands who is interested in more than her meticulous grooming and polished whatnots. Woman’s World retains the full flavour and moral tone of the original magazines while drawing attention to the continuous product placement, cliche and sexism within a newly-crafted narrative:

In the mornings, like most other women throughout the country, she sets about her daily shores, getting into the hidden crevices that ordinary cleaning methods fail to reach. […]Then, when she’s done that, she uses Simply wonderful BRILLO SAP PADS on the cooker, windows, sink, and draining board. At the back of her mind … cleanliness! And that’s true of every woman.

Both volumes use collage to both craft a new narrative and to expose the narratives embedded within advertising.