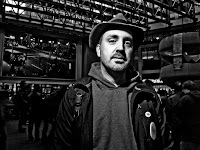 Stephen Collis is an award winning poet, activist, and professor of contemporary literature at Simon Fraser University. His poetry books include Anarchive (New Star 2005), The Commons (Talon Books 2008), On the Material (Talon Books 2010—awarded the BC Book Prize for Poetry), and the forthcoming To the Barricades (Talon Books 2013). He has also written two books of criticism, including Phyllis Webb and the Common Good (Talon Books 2007), and a forthcoming novel, The Red Album (BookThug 2013). His collection of essays on the Occupy movement, Dispatches from the Occupation (Talon Books 2012), is a philosophical meditation on activist tactics, social movements, and change. A Jack and Doris Shadbolt Fellow at Simon Fraser University in 2011/12, Collis has read and lectured across Canada, the United States, and Europe.